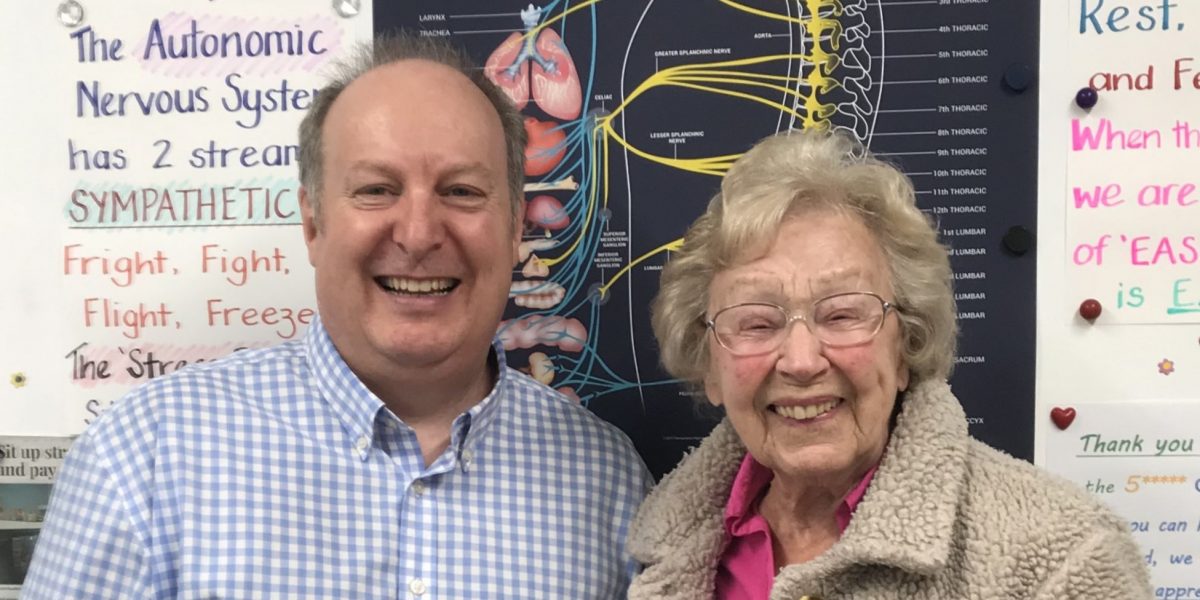 Photo: Mrs Marjorie Yates and Dr Damien O’Dwyer this time last year – happier times – Marjorie had to stand on a step to get to a similar height – she thought this was hilarious.

It is with deep sadness that we say goodbye to a favourite of ours, our poster-girl, Mrs Marjorie Yates.

Marjorie passed away in early August, after a short illness.

She will be sadly missed by many in the New Milton community and not least by everyone at New Milton Chiropractic.

She was hunched over and had her wrist bandaged to stop it moving because of the pain she was feeling.

Marjorie was losing mobility and her sparkling confidence.

Consequently, her social life, which was very precious to her, was suffering too.

At the first consultation with me, Marjorie was completely focused on her back pain.

As trust built, Marjorie unwrapped the bandage and accepted my offer to check her from ‘top to toe’.

The breakthrough came when I asked Marjorie if there was something she had always wanted to do, which her current condition prevented.

The dream, of Marjorie and her late husband, had been to go to Australia for the  Ashes cricket.  She wanted to do this in memory of him.

My response was “It’s on in 8 months. Let’s make that our treatment goal”.

Within a couple of months Marjorie phoned the Barmy Army to enquire about a trip.

They kindly suggested another tour group and the adventure was booked!

Marjorie was at the famous Boxing Day test in Melbourne and the New Year test in Sydney.

She witnessed history with Warne and McGrath’s last tests.

On her return, Marjorie sheepishly said she had swum with the dolphins at Port Stevens.

I had done this myself.

I knew that meant going over the side of the boat, climbing into a net suspended in the water, and getting back up again… no mean feat for anyone.

Marjorie accepted the assistance of a young man who provided the necessary shoves at the appropriate moments.  In his words, “You won’t get back here will you lady?”

…. True – although she did go on several European trips after that and they continued until recent years!

When I left Britain to return to Australia, in 2008, Marjorie continued her chiropractic care with Drs Andrew Newell and Rob Viney, luckily both cricket fans.

When I began working at New Milton Chiropractic in 2015, Marjorie was first in the queue.

We were thrilled to pick up where we left off.

Marjorie at 92 said that “I feel younger and stronger now than I did when I was 75.”

Marjorie loved the glamour of being the public face of New Milton Chiropractic and revelled in being  recognised in the street.

She brightened all of our days when she came in for her adjustments.

She would jog into the room to prove how fit she was!

Her upright posture and vitality was the envy of many, and inspired others to seek our help.

Dr Edwards decided to join our Doctors of Chiropractic in part due to seeing the outstanding posture of those in their eighties and nineties who were coming in for their regular spinal checks.

Marjorie was one of our greatest advocates and told anyone who would listen that her secret was regular chiropractic care.

Her GP’s response was, “Good for you, keep it up!”

Marjorie understood the nature of health and did not want a long period of illness and incapacity – she wanted to go on her own terms – her family with her from Yorkshire in her final days.

We offer our condolences to them, her fan club at Zumba Gold, and everyone sharing our loss.

Rest in Peace Mrs Yates – You are already missed.